Can the US Prevent a Massive Wave of Evictions? 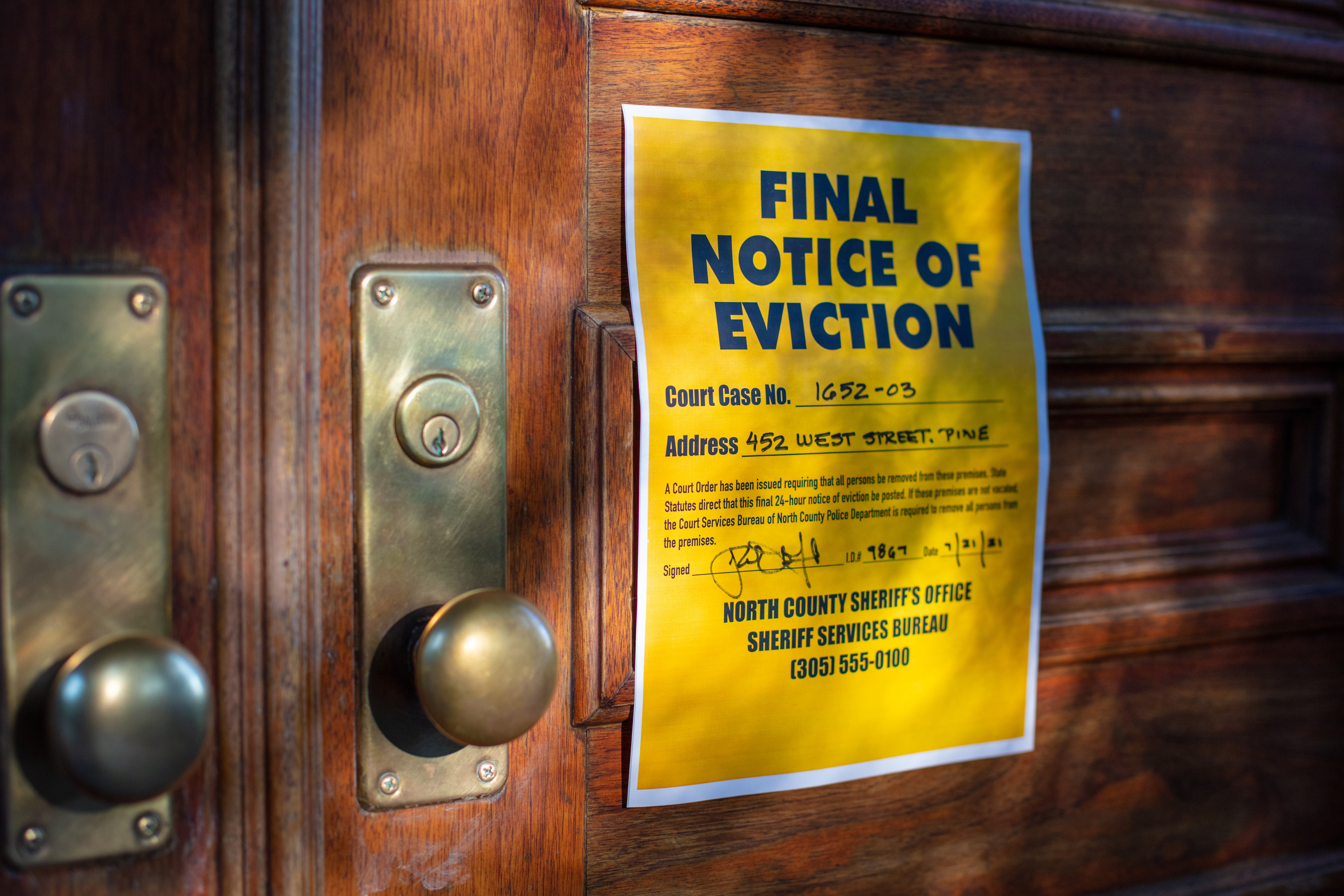 The administering of Social Security is generally taken for granted in America, as are food stamps and unemployment insurance – long-standing safeguards against hunger and want. But for tens of millions of people now struggling to pay rent during the COVID-19 economic crisis, there’s no reliable net to keep them from eviction or even homelessness should they lose their job, become sick, or need cash for an emergency.

President Joe Biden is asking Congress to extend the pandemic-related moratorium on foreclosures and evictions through September as part of his $1.9 billion stimulus proposal. But thereafter, cautions Katherine O’Regan, co-director of the NYU Furman Center for Real Estate and Urban Policy and professor of public policy and planning at NYU Wagner, tides of dispossession threaten to swamp lower-wealth households. Putting aside Washington’s famous fractiousness, the solution to the looming crisis is simple and direct, according to O’Regan – a federal allocation of $4.5 billion yearly to allow local governments to give out short-term emergency rental assistance. As O’Regan explains in a Washington Post op-ed and in the chapter of a new book titled Securing Our Economic Future—both co-authored with Furman co-director Ingrid Gould Ellen and with Wagner alumna Amy Ganz—it’s a modest price tag compared to the $75 billion in mortgage and property tax deductions and capital gains tax breaks for home sales provided each year to wealthier Americans.

“We estimate that after paying rent, the average renter in the bottom national income quintile in 2016 had only $400 remaining each month—a 20 percent decline in real terms since 2000,” O’Regan and co-authors wrote in the Washington Post as Congress horse-traded over the previous stimulus package, signed into law in December. “These razor-thin margins leave families almost nothing to cover other essential expenses, much less to save for a rainy day.”

Extending the US safety net to tenants who’ve fallen behind on their rent would lower public costs, both in economic and in human terms, that states and cities absorb related to joblessness, hospitalization, poor academic performance, and homelessness, O’Regan notes.

NYU News spoke with O’Regan about her proposal, which was shaped partly by her tenure as assistant secretary for policy development and research at the Department of Housing and Urban Development during the Obama administration.

Q: How serious is the approaching eviction crisis, in numbers?

There are several plausible estimates about the scale of this crisis, and all of them are massive. The Urban Institute looked at data through August and estimated that more than 5 million renter households had suffered a job loss, and the situation has grown steadily worse since then. Focusing specifically on the risk of eviction, a report commissioned by the National Council of State Housing Agencies estimated that between 9.7 million and 14.2 million renter households were at risk as of September. At the high end, an Aspen Institute study led by Emily Benfer of Wake Forest estimated that 30-40 million renter households were at risk. Like the health impacts of COVID-19, these economic losses disproportionately affect Black and Hispanic households, as will the unfolding eviction crisis if we do not intervene. While federal assistance has been a crucial lifeline for so many, countless more have been left without aid due to their immigration status, failure to apply, or other eligibility or processing obstacles. And the renter assistance that has been provided temporarily may end quite soon.

Q. Widespread housing insecurity isn’t new. What can the pandemic teach us about housing and income tenuousness across the U.S?

The pandemic has made existing holes in our safety net impossible to ignore. It was a massive, nationwide income shock to a huge range of industries and those they employ, and it triggered the recognition that our crisis would be greatly compounded if millions lost housing immediately after losing their jobs. With some federal assistance, hundreds of jurisdictions around the country are attempting to create temporary emergency assistance programs from scratch to prevent the collateral damage that can cascade from such housing instability. So the key, as you point out in your question, is how to apply this lesson once the crisis has passed. Since 2000, most renters have seen a decline in their real income, after paying their rent, even before COVID. And 40 percent of households can’t shoulder an unexpected expense of $400 without borrowing, leaving them one shock away from the inability to cover their housing cost. There is no reason for a temporary income or expense shock to potentially result in these households facing eviction or homelessness, whether it’s from COVID or the kind of shock we’re more familiar with, like a layoff or a pricey car repair.

Q: How does this crisis differ from the waves of foreclosure in lower-income communities that followed the 2007-08 global financial meltdown?

The 2008 crisis stemmed from the housing market, and as a result, the foreclosure and housing impacts were quite severe. COVID-19 is a labor market problem. But the economic impacts are unparalleled in scale, and the effects of this crisis fall disproportionately on renters, and on small owners. Unlike with mortgages, which can be modified to so that missed payments can be made up many years down the line, that policy tool, developed during the last housing crisis for homeowners, doesn’t help renters. Thus far the CARES Act and eviction moratoria have prevented the eviction wave that many feared, but those benefits are uncertain at present, and sooner or later they will end. A silver lining there is that if we can get people through to mass vaccination, —a possibility that seems far more feasible today than it did a month ago—we can prevent untold suffering and harm.

Q. Your research finds that a few hundred dollars is all that separates many households from an eviction. How does such a sum make such a difference?

Even a relatively modest amount of emergency rental assistance can be an extremely cost-effective solution to the longstanding problem of housing instability and homelessness. Two of our former doctoral students, Rob Collinson and David Reed, did some amazing research on the consequences of evictions, showing they cause an increase in hospitalizations and emergency shelter use, for at least two years after eviction. Those services have massive public costs, so if you can head those off for even a thousand or so dollars in emergency rental payments, that is a clear win from a cost-benefit perspective. And of course, preventing that kind of upheaval for families has all kinds of downstream impact, most notably for the academic performance and mental health of children.

Q. Conservative legislators in both parties may view renter assistance as a disincentive for work, yet your proposal would help building owners.

We think of evictions and their cost mostly in terms of the impact on renters, and for good reason. But they are costly and inefficient for landlords as well. I think the vast majority of landlords would prefer a system that helps tenants experiencing a temporary set-back stay current rather than having to pay the legal fees and live with the uncertainty of pursuing an eviction, to say nothing of the costs and challenge of filling a vacant unit with a tenant who can consistently pay. Our proposal is meant to address the temporary shocks that cause this costly churning, which would free up building owner’s’ resources to invest in repairs and capital improvements, and ease the strain on housing courts, moving them toward their original purpose: adjudicating legal disputes as opposed to serving as debt-collection mechanisms.

Q. What are the chances for passage?

In terms of the political prospects of this proposal, that’s a bit outside of my research expertise, but there was some bipartisan support for related proposals in the past. I am hopeful that the bipartisan interest we’ve seen in tackling housing instability in a cost-effective way will generate some traction in Washington. What’s clear is that going back to business as usual isn’t wise, given that we will certainly face crises again.

Your Anxiety Isn't Going Anywhere. Here's How To Put It To Work

The Curtain Rises on a More Inclusive Broadway

NYU Wagner’s NYC 2025 Initiative Plans Nov. 17 Discussion with the Association for a Better New York on Policies to Help the City to Advance